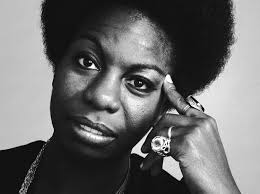 When I initially chose to focus on Nina Simone for my final project, I was excited to discuss a symbol of female empowerment and acceptance. As a pioneer in the civil rights movement, a vocal supporter of black power, and a bipolar black woman who openly talked about her struggles with mental health, Nina Simone epitomized diversity and intersectionality in my eyes. However, as we have discussed in class many times, the way that society remembers an artist can differ immensely from the truth. Especially in Hollywood, where creating a story leans more on fabrication than reality, documenting artists from the past can often times become a retelling of the truth. In the case of Netflix’s popular documentary, “What Happened, Miss Simone,” Nina Simone’s autonomy was discounted, her work taken credit for, and her role in the civil rights movement was written off as a bipolar episode of deep depression. Watching a pitiful portrayal of Simone’s depression, I chose to base my podcast more specifically around the inaccurate portrayal of Nina Simone’s artistry in the film, “What Happened, Miss Simone?”

I had originally planned on writing a traditional essay about Simone’s political activism, however, in our class exercises, I began to really enjoy the act of talking about music more than writing about it. Similar to the way we respond better to listening to a song than simply reading lyrics on a page, I felt that the entire semester was made up of open discussions that challenged my method of thinking. Because I had such a deep respect for Simone going in, in some ways, it felt easier to write the essay. I knew what I wanted to say, I knew that I disagreed with the film’s portrayal of Nina Simone, and I had a solid thesis. However, the idea of turning this into a podcast continually became more attractive. Watching the film for a second time, I knew I needed to just start recording and talking.

This film, for me, was more than just an erasing of history- it robbed Nina Simone of her immense political role and blamed her activism on her poor mental health. Furthermore, the film uses private information such as Simone’s personal diary entries to try to make sense of her public persona. However, in the music industry, an artist’s internal struggles do not overcloud their contributions to public life unless they chose to make those issues public. The fact that this film is made well after Simone has died (film was made in 2015,) and includes so many personal artifacts and anecdotes seems like a huge violation of privacy. Simone did not consent to have her diary exposed to the world and interpreted as a historical artifact, and I believe that in doing so, the film disrespects the fragility of mental health.

Because of all of these caveats, I felt a personal connection to the issue at hand. As someone who is deeply in love with jazz music and respects artist’s sounds apart from their personal life, I began to feel that the essay format was too limiting. In a podcast, I could change the tone of my voice, the pace of my conversation, and the audience is able to measure more of an emotional reaction. Further, I decided to record the podcast in a format of watch-and-respond; meaning I quite literally re-watched the entire film, paused when I felt moved, and recorded instantly. The entire process was extremely organic and entirely more honest than any other project I’ve worked on for a class. By allowing myself that format of responding to the film directly, I was able to criticize in a way that felt productive to me, rather than a formal academic paper. Specifically, I found that because the podcast allowed me to adjust the tone of my voice, I was able to have a more intimate conversation about music and mental health.

The podcast format of this project not only allowed me more creative freedom, but it made the entire experience an enjoyable one. Going into the recording, I remember thinking that it would be difficult to record for a long period of time because I had already planned concise talking points. However, once I started talking, I recorded over 40 minutes just discussing all of these overlaps and intersectional issues. I found that the podcast format allowed me to dive much deeper into this film, and I ended up addressing scenes that I didn’t think twice about after watching the film for the first time.